A quiet weekend after a hectic week

This week was always going to be a busy one.  March seems to be manic normally for most people; there are year end processes to be completed, projects to be finished before the money runs out etc. and for me, and my colleagues that means being on site supporting customers through some of those things.

As my customer this week was a 3 hour drive (on a good day) I'd agreed to travel at my leisure on Sunday afternoon, rather than risk Monday traffic.

Arrived at site and for various reasons, virtually lived there for the rest of the week. Sustained by supplies of chocolate, coffee, cakes and the occasional bacon buttie, the team plodded along, working long hours and remaining positive throughout.

I was dreading the journey home. The M6 heading North on a Friday night is normally horrendous, just one long car park, accidents in the road works and so on. But not this week. I arrived at the point where the M6 Toll joins and discovered that the usual traffic jam was missing. No idea why, but I'll take it thanks. I spend many hours in my car, and usually listen to the radio, or to audiobooks, I'm not a big fan of music in the car; but this week I've been listening to a podcast, The Serial from This American Life, and I've been hooked, even though I knew how it was going to end.

So this weekend was just for chilling. Not much in the way of housework has been done, some baking and some essential tidying and ironing but that's about it.

Having sorted through my fabric stash last weekend, I realised I should make a start on something. But what? I've promised  that this year I'll embark on a BIG project, and here we are, in March and I haven't even started.
I've got a Moda charm pack which was a prize giveaway ( I wish I could find the label, as I've forgotten the name) and a jelly roll that I bought on impulse 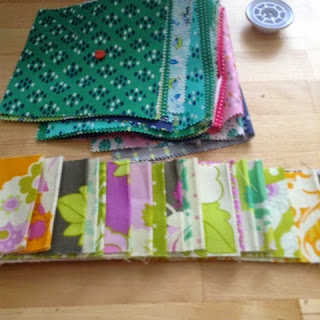 A bit of juggling later, and I've started to put the charm pack squares together 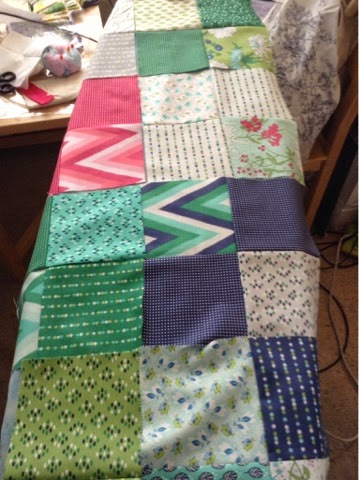 Of course, at the moment, they're just a glorified ironing board cover!

Plans for next week are to put some of them together as a cushion cover and do some hand quilting, and look for patterns for a jelly roll quilt.