Back to hospital visiting again. There are things that are inappropriate for other forums, so they are going here.
When a close relative is ill, your first reaction is to rush to the hospital, in this case in the early hours of the morning. This is not the first time it has happened, last time we were told 'prepare for the worst' ' you may want to call a priest' etc. but once the recovery started it was steady and each day was an improvement.

We thought we'd be planning a funeral, and thankfully, it wasn't necessary. In fact, of late, she has been well enough to go out in a wheelchair. But, the thought has hovered in the back of my mind that this is the start of a downhill slide, and how are we going to deal with it? I never mentioned this to siblings, because, well, you don't do you?

In A&E at the weekend, the various doctors kept mentioning COPD, as if I knew what they meant. For 3 days there was no obvious improvement and again, though this time nobody said it, I thought we'd be planning a funeral.

Now there is a slight improvement, and sister commented last night 'I thought this was it' so we both finally put into words what we've been privately thinking. Why don't we talk about this sort of thing? Are we scared to appear unfeeling? These things need to be discussed. When Dad died, we had no idea where to start, what his wishes were etc. no idea who we needed to tell; for months afterwards we would bump into people in supermarkets etc. who didn't know and it made it difficult.

I think we have to face the reality that Mum's life expectancy now is very poor, AF already restricts her, the COPD is another factor. I daren't even look it up :-(
at 07:45 No comments: 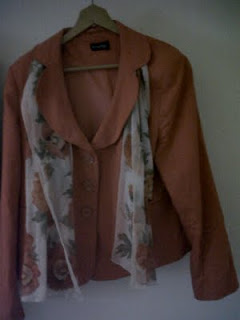 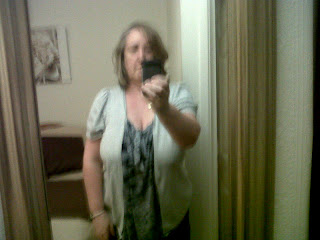 More boring clothes, and a nice-ish jacket.
at 18:58 No comments: 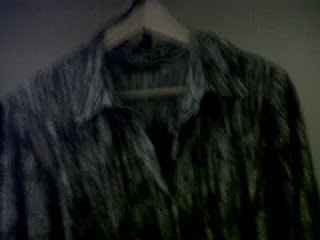 OK, so I've brought with me some really boring clothes, none of which really suit me, and I think that just about sums it up.
at 18:26 No comments:

| have always thought that I had self esteem issues, but it was only when someone on another forum told me to use a full length mirror that I realised how bad I was. My dressing table mirror is covered in scarves, the full length mirror that Mum had is now behind a chest of drawers, the bathroom mirror is a shaving one, and the mirror in the hall I have taught myself not to look in.

When I stay in the hotel, there is a hook over the mirror so I use it to hang my coat. The other mirrors I just ignore.
I am going to try making some tops for myself, so that it has the double advantage of being a proper fit, and also moneysaving.
at 10:41 No comments: