I've been zooming from one end of the M6 to the other this month and it doesn't really get to be easy. No matter what time you leave the house the traffic will be terrible at some point. Of course if I was travelling for fun, I'd leave late at night or early in the morning, but I'm not; I'm travelling for work, so have no choice but to be there by half nine. This generally means making a decision at some point about which direction to take, and for this you are very dependent on the gantry signs. These can vary from the useful; Jct 11 -7 70 minutes delay: to the confusing - what is a 'long delay'?: to the bizarre ' pedestrians on carriageway'

Heading for Leicester for example, there are many options, including leaving the M6 early and heading through Stoke. When the signs indicate long delays, and lets be honest, that's sort of normal,the M6 Toll is my favourite. It's so much easier, and more importantly, means you can keep a constant speed and so reduce fuel consumption. Yes, it costs, but I'll never get that time back, and its classed as a business expense.

Due to the nature of the customer sites I visit (out of town depots) public transport isn't really an option. Except for visits to London, when there isn't really an alternative. Very little car parking space and horrendously expensive when you find it.

A few weeks ago I spent 2 days in London; getting the first train in the morning. Now this isn't as easy as it sounds, as by and large buses don't start running that early. Except if you live in a City as I do, so I'm lucky enough to have buses which run all night. On the minus side, they don't run very often, so I had to leave the house in time to get the 5 o'clock bus. Then sat in Lime Street Station for ages. I was glad when I got to Euston that I was straight onto my next train, and after only 10 minutes was at the station ready for the walk to the office.
End of day, walked the 2 miles to the swish hotel; in heels!

Met the lovely Robyn for tea and a catch up.
Then to the office the next day, walking again, and the same journey in reverse.

But one thing jumps out about the various journeys. The public transport in Liverpool is way dirtier and less efficient than its London counterpart.

Purely a random thought, prompted by an afternoon with my sister and a conversation last week with some work colleagues. Many people have music on when they are pottering round the house, and this is what my colleagues were talking about. They were totally shocked when I said I didn't have a radio and rarely listened to music.
When I was growing up, music was something that you consciously sat and listened to; it wasn't background stuff, so I suppose I never got into the habit. In the car, I will listen to the radio, but its likely to be a comedy show on Radio 4 Extra.
Last night however, my sister heard a piece of music that somehow reminded her of Dad. Now that sort of narrowed the choices a bit, but she couldn't remember what it was.
Eventually, after much use of Google I realised it was 'Strangers in the night' - problem solved. But it wasn't, as when we looked it up, mostly we found the Frank Sinatra version, and although Dad liked Frank, it somehow didn't have an association for us.
A bit more 'googling' and we found the clip that had prompted the memory and it was orchestral. The penny dropped, so having downloaded Bert Kaempfert's version I was instantly transported back forty years to watching Dad conduct an orchestra in the front room.
Telling J about it when I got home, he too had a memory, of his precious Grandad singing the tune to him when he was small; the words were not "strangers in the night" though, but "dooby dooby doo da da da da der" and so on.

March - oh no its April already!


I'm not quite sure what happened to March?  It all started really well......
End of Frugal February left me with a virtually empty fridge; all sorts of random things eaten out of the freezer, in very odd combinations, but a good idea of how long things last for.  Loo roll being a good example.
Then a lovely weekend in 'that London' with Jenni, Robyn, Fay and Lula.  Some people actually managed to take respectable photo's and post them on blogs, I just can't get the hang of photo's.  And a very bargainous trip it was too!  Normally tickets to London are expensive, but by using the option 'cheaper trains with slower journeys' I managed to get the ticket for the grand total of £23 return.  It meant changing trains at Crewe, but that was just another excuse to sit and watch the world go by.

I do love train stations.  Wondering where everyone is going, or coming back from.

Arrived in London Euston and navigated my way via the underground to Southwark where we were meeting.  Much cheery eating in cafes and wandering around looking at food is a lovely way to spend an afternoon.  It ended with a boat ride up the Thames and then more tea and cake before heading to our overnight stop to dump our bags and relax before going to a lovely Italian place for pizza and wine.  We walked MILES!!!

The following day saw us in Spitalfields where we bought many scarves and had a lovely brunch before getting our respective trains back home.  Again on the slow train: I never knew there were so many stations between London Euston and Crewe.

March is a busy month in work, year end means that lots of customers have deadlines to meet and I've been mainly whizzing from one end of the country to another. Leaving home in blizzards and arriving in glorious sunshine - odd sort of weather, but lovely for getting out and about.
Somewhere in there was Mothers Day, and Easter, and a lovely afternoon having Afternoon Tea.  Such a civilised thing to be doing! Tiny little sandwiches, cake and scones. What more can you ask? 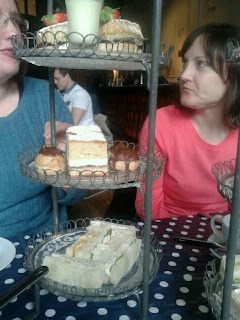 And yet again I've signed up to do the Race for Life - I've also volunteered to help out at other events.  So.....I'd better actually get out there and see if I can manage to at least walk 5K - running it is but a distant memory.
at 16:10 No comments: